Standing in Solidarity Against Racism 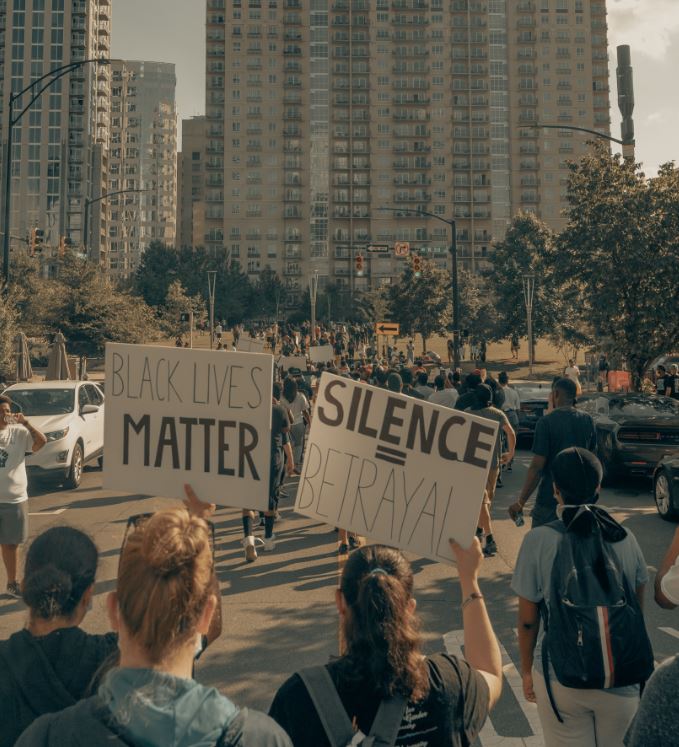 This week, we are featuring a piece contributed by Sheri Kashman, Principal Consultant at Jouta.

There are few of us over the last week who haven’t seen or heard about the circumstances across the US (and beyond) as a result of the tragic and grossly unjustified death of George Floyd (along with Ahmaud Arbery and so many others who came before them). In what has quickly become one of the largest uprisings in the US in decades, on the backdrop of the coronavirus, the world is once again reeling. But, as Trevor Noah of the Daily Show put it, “while everyone is facing the battle against coronavirus, Black people in America are still facing the battle against racism… and coronavirus.”

An important acknowledgement before I begin; I sit down to write this as someone who was born into privilege as a middle class, white, body-normative female. In fact, all of us at Jouta could be described that way (in addition to one white male). Our social, political and economic systems have set us up for privilege in numerous ways. This is starkly opposed to how those same systems have oppressed Black people – and most certainly in Canada, Indigenous people, among other people of colour and minorities.

As HR professionals, we typically take a stance of equity for all, and while it is of course true that all lives matter (must that even be stated?), we feel very strongly that taking that stance diminishes the critical message and vision of Black Lives Matter. This is a message that counters the socio-political reality that Black lives don’t matter as much as White lives. It points to the reality that Black lives are not prioritized, served and protected in the same way that White lives are. It is an affirmation that demands acknowledgement, accountability and justice.

That brings me to a second acknowledgement; we at Jouta are not experts on this subject – and by this “subject” (which, to be clear, goes well beyond a mere subject or topic), I mean specifically Black Lives Matter. I’m not sure we can do it the justice it deserves. However, in support, in solidarity, in hopes that we can move the mark even a fraction for even one person, we must try. As outlined by someone who can do this subject justice (Reni Eddo-Lodge, author of Why I’m No Longer Talking to White People About Race):

“…. our current racial structure (is that it) has always fallen on the shoulders of those who are at the bottom to change it. Yet racism is a white problem. It reveals the anxieties, hypocrisies and double standards of whiteness. It is a problem in the psyche of whiteness that white people must take responsibility to solve. You can only do so much from the outside.”

Despite the widespread news coverage over the last week, it would be easy for many to avoid it, to pass it off as “them, not us” (i.e. those in the US versus Canada), or to see it as media sensationalism. But this is a critical issue for all humanity, everywhere. We know racism, stereotyping and bias exists in all facets of life, in institutions, social circles, workplaces and households. And while we may believe ourselves to be non-racist, we’re not all necessarily anti-racist, and we are all biased in some way.

At a time when we thought a pandemic would bring us closer globally, we are continuing to see a heartbreaking divide. And speaking for us here at Jouta, it comes with a feeling of deep sadness and powerlessness. But are we really powerless? Perhaps so, from the perspective of having an impact on firmly entrenched social and political racial inequity. But, to be clear, we are not powerless in making an effort to understand how we all play a part in that inequity. Yes, you. Yes, me. Yes, all of us.

As you’ve watched the news coverage of protests (violent and peaceful alike), what’s been on your mind? What coverage do you find yourself gravitating towards? Have you found yourself getting caught up in the sensationalism of extreme violence, or have you sought out images and stories of peaceful demonstrations? Do you find yourself siding with one or another “approach”? What’ve been your immediate impressions of the rioting and looting? Have you been shocked, dismayed, scared, bewildered, deeply disappointed – or even entertained? Most importantly, have you taken a step back to ask yourself how you contribute to the inequity and injustice that’s the fundamental basis of what you’re seeing?

We acknowledge that not all of our readers are White, and we wish to observe and honour the experiences of our Indigenous clients, partners and friends – in addition, of course, to other persons of colour – many of whom have also experienced racial inequity and injustice. While White privilege is succinctly defined by the Oxford Dictionary as “the inherent advantages possessed by a White person on the basis of their race in a society characterized by racial inequality and injustice,” the definition doesn’t get to the heart of the matter. Because White privilege is a fundamental component of racial injustice, it’s important to be clear on what that means. You have White privilege if:

While it’s necessary that we do so, we are writing, acting, responding, seeing and disbelieving based on a recent despicable and racist crime – perhaps for some, not so much because it happened, but because of the very public coverage and resulting circumstances (in addition to standing in solidarity with many others on social media). And that in itself is a striking example of White privilege for many of us. If that makes you feel uncomfortable or even angers you, I ask you to answer this question honestly: Prior to May 25th, 2020, when was the last time you really thought about racial inequity or did anything about it?

Not our Problem in Canada?

Now let’s talk about the idea that this is a US-specific problem. While our demographics are significantly different from those of the US (according to Statistics Canada, 3.5% of Canadians identify as Black, with 1% in BC), we are home to many non-white Canadians and immigrants. Indigenous people in Canada (who make up nearly 5% of our population) have also suffered in countless incomprehensible ways. Just a few short months ago, during the Wet’suwet’en pipeline protests, there was a significant rise in anti-Indigenous racism and violence. Further, in recent weeks and months, there has been a major rise in hate crimes against Asian people in BC due to ignorant perceptions associated with the coronavirus. And just earlier this week in Surrey, a 16-year old Black girl who was waiting for the bus was thrown to the ground and handcuffed by two police officers – after she told them they had the wrong person. While one officer was holding the girl down with his knee, the other went through her belongings and found her ID. Upon realizing their mistake, they simply left her there and moved on.

The above are just a few of the examples of racial crime/injustice in Canada. On every front, we hear countless stories of both unintentional and blatant racism directed at people on the street, in the courtroom, in the workplace and otherwise.

It’s time for us to wake up to the reality of inequity and racism in Canada and acknowledge how deeply embedded it is in our culture too. Simply saying it’s worse in the US or related sentiments denies the reality of Indigenous genocide, daily racism and the disproportion of inmates in Canada despite our demographics: 9.5% of Canadian federal inmates are Black (but make up only 3.5% of our population), 23% are Indigenous (but make up only 5% of our population) and one in three incarcerated women are Indigenous.

As outlined above, none of us are powerless, no matter how far removed we feel we are. And in fact, those of us with White privilege, once again, have more power than we may think. So, what can you/we do?

In the last few months, globally, we were asked to go inside, and for many of us to stay inside for weeks on end. Now, we would be in service of justice to do so again – but more figuratively than literally. Now is the time to be mindful of what you, what I, what WE bring to the table where injustice is concerned. You are not being asked to join a protest or to put your well-being/life on the line. But rather than simply watch the news from a place of shock and sadness, I encourage and ask you to consider how your own unconscious bias and privilege (and that of your employees) impacts your workplace, your relationships and your community.

None of us are perfect human beings and we’ve all made mistakes borne of ignorance and the deeply entrenched social and political systems of privilege and oppression. Listen, learn, educate, share stories and truth. Do something. Do it differently. Do it today. Don’t pretend it’s not happening. As the Canadian Human Rights Commission reminded us this week: In the words of Martin Luther King Jr: “There comes a time when silence is betrayal.” That time is now.