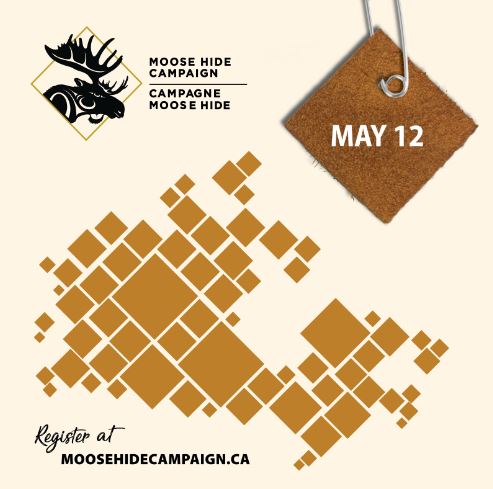 Founded on the Highway of Tears, the Moose Hide Campaign is an Indigenous-led, grassroots movement, primarily focused on men and boys supporting and holding each other accountable to stand up and speak out against violence, and to be healthy role models. However, all genders are welcomed and encouraged to support the movement. As we noted in our 2021 holiday post, there are several ways to support the campaign, from simply wearing a moose hide pin to taking part in campaign day on May 12th.

A day of ceremony, Moose Hide Campaign Day is a challenge to men and boys – and an invitation to all Canadians – to fast together from sunrise to sunset as a means of deepening our collective experience.

As indicated by Moose Hide, fasting is culturally significant for many Indigenous and traditional cultures when addressing meaningful challenges or transitions, doing important work, seeking guidance, and/or deepening intentions and commitments. Along with fasting, supporters are encouraged to take part in interactive online workshops, join the Walk to End Violence in Victoria, wear and share moose hide pins, and organize/host events to take a stand against violence towards women and children.

Prevalence, impact, and forms of violence

Regardless of where and how violence occurs, and whether it is experienced directly or indirectly, it impacts victims in many devastating ways. Violence that occurs outside of work, including domestic violence and sexual assault, can also significantly impact victims (and others) at work. Domestic violence (which includes, but is not limited to, physical, emotional, psychological, and sexual abuse) occurs in every type of intimate relationship – be those individuals living together, casually dating, married, divorced/separated, etc.

The Moose Hide Campaign was founded with a focus on the injustices and violence faced by women and children, particularly those who are Indigenous. While the intent is to take a stand against all types of violence, domestic violence (also known as intimate partner violence or family violence) is the most common kind of violence experienced by women and girls. Not only is it pervasive, it is also a form of violence that may be ongoing, often hidden, and even justified by victims. For that reason, it’s important that employers are aware of and prepared to take steps if they witness signs of it – in addition to any form of violence.

The impact of domestic violence in the workplace

A partnership study between the Canadian Labour Congress and the University of Western Ontario found that 1 in 3 workers have experienced domestic violence at least once, and of those:

While domestic violence occurs towards all genders and ages, it most commonly occurs towards women, and results in the most serious injuries and impacts. Intersecting identities, including being Indigenous or a person of colour, having a disability, belonging to the LGBTQ2S+ community, and living in a remote or rural community, further compound risk towards women.

Keeping in mind that there are many possible explanations for the following, some of the warning signs of potential domestic violence and/or abusive behaviour include:

What employers can do if they witness signs of violence

If you observe any of the potential warning signs of violence, don’t make assumptions, ignore it, or judge it. Help break the stigma and provide a safe opportunity to address it by doing the following:

Refer also to the WorkSafe BC’s guidelines on addressing domestic violence in the workplace.

Regardless of the type of violence and where/how it occurs, its impact is far-reaching and can be significantly traumatic in all aspects of a victim’s life. We encourage you and your team to take part in the Moose Hide Campaign in a way that is meaningful for you and your workplace.

Join Jouta’s HR Consultants in supporting the Moose Hide Campaign to stand up and speak out against violence.